ASK ANGELA LIN
5 Simple Changes to Your Income Statement to Make It Easier to Understand for Growing Your Profits
Written by Angela Lin on June 15, 2022 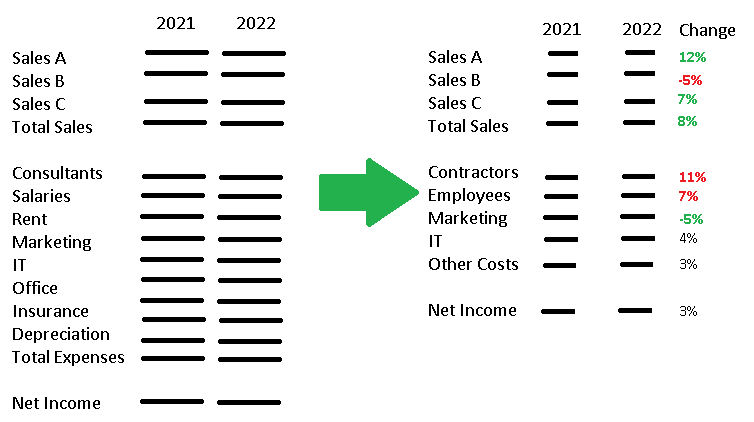 If your income statement is making your head hurt when you see it, it's probably because there's way too many numbers that's not organized in a meaningful way to you. Here's 5 simple changes that you can make in 15 minutes to your income statement to make it easier to understand for growing your profits...
1. Cut Down the Number of Lines
There's a lot of lines on your income statement since bookkeepers and accountants are trained to ensure there's lots of different categories of sales and expenses for correct entries. However, you need to focus on the numbers that matter to growing the business. So here's what you need to ask your bookkeeper/accountant to start doing when they prepare financials for you:
For sales of your different services, you should have probably 3 to 4 main services or groups at the most. These should be the ones with the biggest $ in sales. Everything else can be grouped as "Other Services Sales".
For costs, you should have the 3 to 4 biggest costs that change, or what we call variable costs. These are costs that vary depending on how much sales that you are doing. These are things like your contractors, employees, marketing, perhaps IT depending on your business, and other costs that do vary. If you have both contractors and employees, keep them separate since they are compensated differently and also affect how you calculate your profits. Once you take the 3 to 4 biggest costs, all other costs can just be 1 line called "Other Variable Costs".
Then there's fixed costs, which are costs that don't move very much year-to-year like your rent, insurance, telephone, office supplies, etc. And you likely won't be dramatically increasing your profits through these costs as much as the variable/controllable costs described above. So all these costs can just be 1 line called "Fixed Costs", or "Facilities" or a name that makes sense to you.
2. Order the Amounts from Biggest to Smallest
Once you have the 3 to 4 biggest services for the sales, you'll want to order these in descending order, with the service that has the biggest $ sales at the top, and then the smallest $ at the bottom. At the very bottom would be the "Other Services Sales". This way, you'll know that when you're looking at it, you're starting out with your biggest service to see if it's up or down.
Similarly, once you have the biggest 3 to 4 costs, order it from the biggest cost to the smallest of these costs. Then, have it follow the "Other Variable Costs" and "Fixed Costs".

3. Cut Down the Numbers to 3 Digits Only to Get a High Level View
Accounting systems will give you all the numbers, down to 2 decimal places because cents matter for being super detailed. But you're using the numbers to make decisions that will impact your business. This requires a High Level to see the big changes, not a detailed view. You can get your bookkeeper to easily format this before the financials get to you.
Wonder why phone area codes are 3 digits? Followed by another 3 digits? Because it's easier to process and remember. Humans can deal with smaller chunks of information, so that we can do something with it, instead of using most of our brain in trying to just get through the long list of numbers.
So, instead of having 6 to 9 digits for each number, just cut it down to 3 digits.
If your company has annual sales of $100,000 to $1,000,000, then you'll want to use thousands or K as the unit. Instead of $583, 491.62, you'll just have $583. Everything will be rounded to the nearest thousand. So $4,713 will just be $5. And if it's below $1,000? Then just round it to $1 or $0. On a monthly basis, this means that your revenues are anywhere from $8.33 to $83.3.
If your company has sales from $1,000,000 to $10,000,000, then you'll want to use millions or M as the unit. So instead of $5,834,916.20, you'll just have $5.83. And then any amounts that's below $1,000,000, for example $472,503.87 would be just $0.47.
You'll want to do this for all your costs too.
This way, you'll be able to really see what are the main changes to your business compared to prior periods, and identify the key ones that you'll need to work on. This is how accountants and CFO's of the more profitable companies can quickly determine which services and costs need extra attention. This will work for you regardless of your company size, including companies at $100M+ annual revenues that I've worked with.
4. Add a $ and % Change
One thing that I find frustrating is a lot of bookkeepers/accountants/auditors don't provide any changes to the owners. They just provide this month/quarter/year's numbers in one column and the prior period for comparison. So then owners are stuck with trying to calculate the change.
You should request your financial statement prepare to add a column for the $ change and the % change. So, for example, if this year, your sales for Service A was $483K, and last year was $564, then there was a $ change of $81K or 14% lower. You'll want to find out why this service's sales went down a lot.
5. Flag Action Steps with Red and Green Thresholds
Even though we cut down the number of lines on your income statement so you just have the biggest sales and costs, it's important for you to easily glance at which are the action steps you need to take next for optimize your profits.
So you'll need to set some thresholds. I recommend using both a $ and % change since sometimes it could be a big $ change, such as rent, but it's only 2%, then there's not that much you can do about it.
Guideline is on a monthly basis, you'll want to take about 1% of your monthly revenues as the $ threshold. For example, if your company is doing $650,000 in sales annually, then divide it by 12, to get $54,167 monthly sales. And then multiply it by 1%, which gets you about $542. You can round it to $0.5 as your monthly income statement will now be in thousands. So anything that changes by greater than $0.5 when you're comparing this month to a prior period (such as the same month last year), then you'll want to flag it.
However, we also want to ensure that you need to set the % threshold, which you can use 5% as the starting point. So for this example, anything that changes up or down by more than $0.5K AND 5%, then you'll want to flag.
So in this example, if something changes by $0.3K and 17%, it doesn't flag since the $ change is too small. If something changes by $1K and 2%, it still doesn't flag. It would only flag if it's greater than $0.5K AND 5%, such as $0.7K and 6%.
Now, you want to add indicators. It's similar to driving, where red light means stop and danger, and green light means things are going good. So you'll want to do this for your sales, where if it's higher than both your $ and % threshold, then it's green. However, if it's changed by your $ and % threshold lower, then it's red. For example, sales that is $0.7K and 6% lower is in red.
For costs, it's the opposite since costs going up could mean you need a better control of your costs if it's not in line with growing sales, so if it's higher than your threshold, then it's red. And if costs are lower, and it exceeds your threshold, such as costs being $0.8K and 7% lower, it's in green.
This is something you can get your bookkeeper/accountant to do, or I can train them with an easy to update spreadsheet. This will then allow you to start seeing the big ones that changed, and to determine if they're red, what caused the sales to drop or costs to go higher, and how you can get the sales/costs back. And if they're green, then what did you do to get higher sales and lower costs, and can you do more of it or for your other services etc.
NEXT STEP
If you're interested in getting this set up so that you or your bookkeeper/accountant can easily update this in just 15 minutes a month once you do the initial quick set-up, OR you want to accelerate your profit growth, then please contact me for next steps for helping you easily understand your financials and grow your profits via angela@askangelalin.com.

What are your biggest problems with your accounting/financial processes for growing your profits? Comment below so that I can help you!

If you're interested in easily understanding your financials and growing your profits, then definitely reach out and request a free strategy session today.